“Island Assembly” is a place where business/industry members and concerned citizens about the islands’ prosperity get together and discuss branding these islands beyond their expert boundaries. On February 28, 2019, the Assembly was held in the meeting room at Development Center in Motomachi, Oshima. 11 members from different fields of expertise attended.

Firstly, the day after the 2nd Tokyo Treasure Islands Assembly, the polished contents were shared from the previous presentation prepared by the assigned member. To encourage Oshima to keep attending, we chose “Sunset Palm Line” as a meeting place. Regarding this choice, a guest advisor’s views were shared: “What story you can draw will be important”, “Ideally, it should be so interesting that all participants would gather to hear you out.”

The essential task for the 5th Island Assembly was to solidify the main action plan to make their brand concept “repeat-worthy island” come true. They moved on to the discussion after many examples were referenced. First, the story of Sunset Palm Line was presented, which had been prepared by one of the participants.

Sunset Palm Line stretches for 5 km along the sea
On this seemingly remote road, there appears a cafe
The islanders gathered at this cafe, and it became vibrant
Tourists who heard the news gathered and it became lively
After a few years, many stores gathered around the cafe

While there were positive feedbacks from the other participants, the facilitator asked “In this story, building a cafe is necessary. Who will build it? Would people gather? Does it have to be a cafe?” Many thoughts were shared amongst the members, and the facilitator organized a conclusion to build a cafe; “A base of community from islander’s perspective is lacking. The first place to visit for tourists is lacking. To fulfill both demands, a cafe is necessary on Sunset Palm Line.” 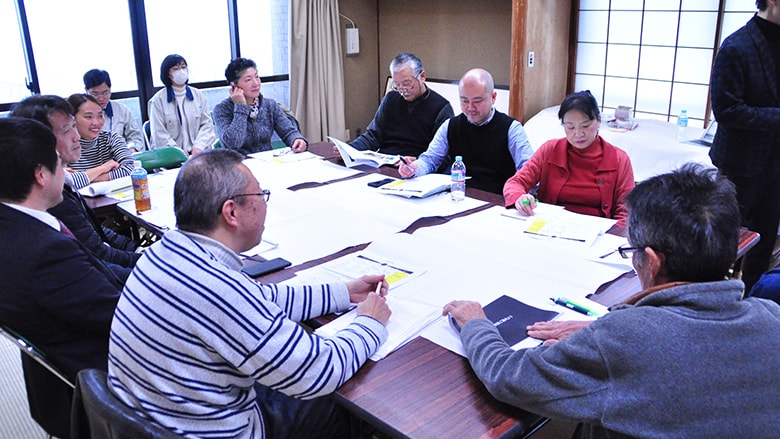 Next, they moved on to organize the “idea.” One of the participants suggested “I feel that the base could be a cafe, but maybe plant strong trees that can withstand the seaside wind, and people who find it attractive would gather on the street. From there, the street would become lively as more stores come”. In response to this, the facilitator emphasized that “Everyone must have a shared understanding that the place must be ‘worthy to be loved by the islanders’ instead of just making it a nice and attractive place to visitors just for the sake of it.”

Following that, they organized the “atmosphere.” Answering to the question raised by the facilitator “What kind of atmosphere on the street would you aim for?”, there were answers like “making a place where sub-culture unique to Oshima would emerge”, such as art experience and new food of Oshima. As for the exterior of the cafe, looking for inspirations from successful examples around Japan, they would avoid other places such as Hawaii. Everyone agreed that atmosphere unique to Oshima is what they should aim for.

Also, the facilitator confirmed the contents of certain aspects of the action plans presented until now, such as “infrastructure of roads” and “regular events to gather customers”.

The renovation of roads would include planting trees along the 5km road to make it appealing, and to attract customers in the winter, plants that would bloom from January to April would be ideal. A solid and specific plan was made.

For regular attraction, ideas came out: daily events such as “Experience Anko-san” to decorate an “Anko Costume” with collaboration with famous designers, and weekly events such as “farmer’s market” where local vegetables, fish, and general goods will be sold. The suggested events can be enjoyed by both the islanders and the tourists alike.

Remembering the discussion above, they now used the remaining time to prepare for the final presentation in March, held at “Tokyo Treasure Islands Museum.”