Island Meetings are cross-sector forums where people involved in businesses and industries that support island life and those seeking to invigorate their islands can gather to discuss island branding. The fourth Island Meeting on Oshima was held on December 20, 2018. Following on from the earlier meetings in the series, 13 participants from various industries gathered for the session. 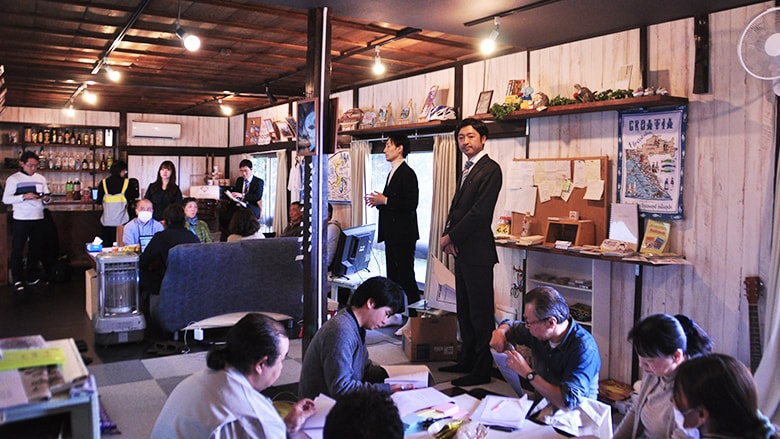 At the previous meeting, the persona for the typical visitor to Oshima was determined as a city-dwelling woman in her late 30s working as a writer. The main task set for the fourth meeting was to consider a specific action plan for this persona. The starting-point for this was “island treasures” the group wanted to communicate to this persona. To illustrate such “island treasures,” participants took turns to present photos of things, experiences, places, and other island attributes they had taken since the previous session, along with worksheets describing the images.

Many of the photographs featured Oshima activities that the presenter would like the persona to experience, including savoring an aperitif in the sea breeze at Izumihama beach, enjoying the blessings of camellias in bloom and dressing up in traditional Anko costume, as well as creating popular local meeting places including community spaces linking people with the island’s natural environment and Nakamise Street in Motomachi. To express the feelings that such experiences would evoke in the persona, presenters suggested phrases like, “It’s luxury to be able to come here so easily from Tokyo” and “it’s fun to dress in Anko costume!.”

Based on the presentations, the facilitator used yellow stickers to note what the photos expressed and red stickers to infer what the persona might feel or the value she might perceive, and affixed these to photographs for better visualization of “island treasures.”

To further help participants to visualize their thoughts on the presentations, they were each given three stickers to vote on the “island treasures” they rated highly and values that they wanted the persona to perceive. The “aperitif in the sea breeze” photo attracted a lot of votes for its attractive scenery, and examples of desirable perceived values included “the accessible luxury of proximity to the metropolis,” “a rich natural environment,” “out-of-the-ordinary experiences,” and “the fun of boat trips on the sea.” 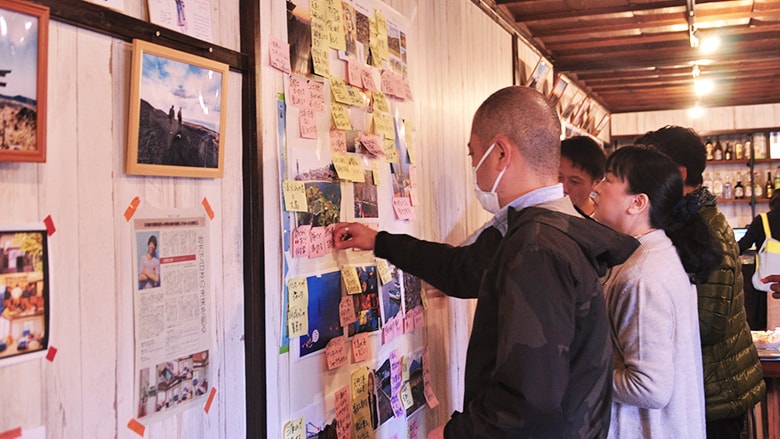 Next, each participant wrote three particularly important elements of the persona profile, three vital elements of brand value, and three features or realities underpinning brand values on tags and stuck them on an island brand concept sheet. Examples of persona characteristics included “tired from work in the city,” “seeking restoration and out-of-the-ordinary experiences,” and “wanting experiences not available elsewhere.” Examples of key brand value elements included “favorite island,” and “ability to inject the extraordinary into the everyday.” Features or realities underpinning brand values included “genuinely kind locals” in terms of people, “kusaya sundried fish” in terms of things, “pleasure boats” and “geo-tours” as experiences, and “the Ura-Sabaku black desert,” “the sea,” and “the Sunset Palm Line cycling course” as places.

The brand concept derived from these elements sought by the persona was summarized as the ability to inject the extraordinary into the everyday, relaxation and restoration alone in the great outdoors, and a “favorite island” from which to draw energy.

Based on the brand values described above, participants then wrote their ideas about what kinds of experiences and opportunities would communicate these island values on an action idea sheet and presented their thoughts to the group. Plans suggested included setting up a seaside café along the Palm Line and night trekking in the Ura-Sabaku black desert.

After all the presentations were finished, participants engaged in a lively exchange of opinions on ways of bringing the action plans to reality. The program for the 4th Island Meeting concluded with in-depth discussion of the action plans.