Island Meetings are cross-sector forums where people involved in businesses and industries that support island life and those seeking to invigorate their islands can gather to discuss island branding. The third Island Meeting on Oshima was held on November 21, 2018. Following on from the first and second meetings in the series, 18 participants from various industries came together again on the island. 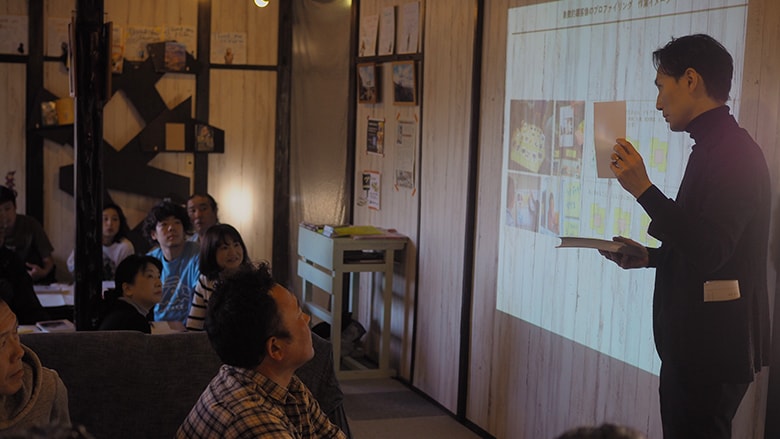 After welcoming remarks and a recap of the second meeting, participants moved on to the main purpose of the third meeting, which was to imagine the persona of a typical island visitor and develop a firm image of that person. The facilitator explained that rather than trying to aim branding at everyone, it is easier to communicate “island treasures” in attractive ways when you have a clear persona for the type of person you want to evoke empathy in and turn into a fan of the island.

The group divided into three teams and used photos of a wide range of people to imagine personal details about them such as gender, age, work, and lifestyle. Participants each considered what kind of people they wanted to come to the island, and narrowed their selection down to one or two photos before sharing their choices with the other members of their team. After further discussion, each team selected one or two of the images, developed a persona for the typical visitor represented by those images, and wrote down details on stickers.

Team A selected a photo of a beautiful woman with a bright, energetic vibe and decided that she was a 31-year-old city-dweller with a busy and stressful job as a designer. Since she can work from anywhere, she started making frequent stays on the island in the summers. Once she is married, she would like to move to the island permanently and bring her children up there.

Team B chose a photo of an energetic young man, and decided that he came from Tokyo’s Setagaya Ward and worked in finance in the center of the city. After stumbling across publicity for Oshima on the Internet, he visited for a freewheeling trip around the island and liked it so much that he started coming back regularly. Someday he would like to run a guest house.

Team C opted for a photo of an intelligent-looking woman with short hair. They decided that she was a born-and-bred Tokyoite in her late 30s who worked as a writer for a women’s magazine in the central city. She likes to travel, and took a day-trip to Oshima after seeing a poster in a train station. Charmed by interaction with the locals, hot springs, and island activities, she became a fan of the island and a repeat visitor.

The personas chosen by Teams A and B clearly had a different purpose for visiting the island from that selected by Team C, as the former were thinking of moving to Oshima, while the latter was simply a visitor. As the three teams engaged in lively discussion and views diverged, the general trend of opinion began to change after people started to voice the views that island residents and visitors should be considered separately and that boosting visitor numbers should be the priority. Once participants realized that repeat visitors may later move to Oshima, the three teams converged on the idea of firstly targeting potential fans of the island.

After a short break, the group moved on to the task of listing keys for success (KFS). Each team specifically identified how they can attract the persona to the island and what is required to achieve that, and then presented their findings.

Team A felt it was vital to get people talking about the island when they went home. They underlined the importance of enabling people to discover new things and re-energize themselves so that they would want to tell others about Oshima and come again. They also noted the need for transportation on the island, eating and drinking places, and forums and events for interaction between tourists and locals.

Team B focused on the importance of helping visitors feel like they belong on the island. This would require forums and activities where they could talk with locals, as well as experiences bringing them into contact with local agriculture, industries, education, etc.

For Team C, the most important thing was providing gentle excitement and a sense of fulfillment. The team commented that the island currently lacked accommodation and places to spend rainy days, as well as levels of hospitality and contact with locals that would exceed visitors’ expectations. Specific solutions to these problems could include holding a farmers’ market in the new ferry terminal of the Okada Port, and utilization of the closed elementary school.

Based on the outcomes of the discussion, participants were set a task to complete before the next meeting. They were each asked to identify island attractions they would like to introduce to the persona profiled during the session and take actual photos of places and things that could become “island treasures.”