The Tokyo Treasure Islands Project was launched in 2018 with the aim of further expanding the appeal of Tokyo’s islands by making even more effective use of their wonderful scenery, local specialties, culture, and other attributes. The residents of the 11 islands in the Pacific that form part of the Tokyo Metropolis have taken the lead in this initiative to create, refine, and broadly publicize the Tokyo Treasure Islands brand and generate added value for the islands. As part of the project, the four islands of Oshima, Kozushima, Miyakejima, and Hachijojima are each holding a series of five Island Meetings in fiscal 2018 to discuss branding.

The first of Oshima’s Island Meetings was held on September 19 in the Shinmachitei old house at the former Tsubakien Hotel in the Kandachi district. The meeting was attended by 19 participants from a variety of industries, including tourism operators such as guest house owners and eco-tour guides; farmers, fishers, and others working in primary industries; and financial institution employees.

The session started with a welcome from the Tokyo Metropolitan Government (TMG) Bureau of General Affairs (the secretariat of the Islands Meeting) and an explanation of the goals and annual schedule for Island Meetings. Before the main discussion began, time was allowed for an icebreaker enabling participants to share background information on their respective activities. For this purpose, participants split into seven groups of three and asked each other questions before introducing one another to the whole meeting. Many of the groups contained members of different generations with little previous connection to one another, and members of some groups had never even met before.

Each group also presented a collaboration plan drawing on members’ different fields of business to address the theme of “making the island more attractive.” Specific ideas were presented that showed the potential for partnerships between different industries. These included cooking and serving vegetables from farms in hotels and guest houses, and tour packages combining accommodation with activities such as horse therapy and fishing trips including a talk by a professional fisher and the chance to eat one’s own catch.

The secretariat then gave a presentation on brands and branding to foster shared awareness of island branding, which is the objective of the Island Meetings. As a specific example, the presentation included an outline of initiatives by Okinoerabu-jima island (Kagoshima Prefecture). 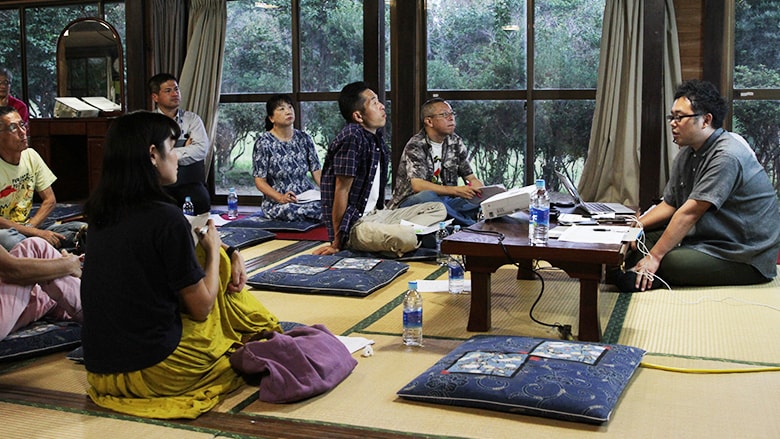 Next, participants split into four groups for group work where each member wrote out “island treasures” that he or she wanted to pass on to the future. After the individual group members discussed and listed their treasures on a single piece of paper, the groups then presented their ideas in turn.

For Team A, the island treasure they particularly wanted to preserve on was “Anko-san.” Now a generic term for women who wear Oshima’s traditional dress of checkered kimono and an apron teamed with a cotton head-towel decorated with motifs of Mt. Mihara, camellia, and waves, “Anko-san” is a local dialect term derived from “anekko,” an honorific meaning “a lady who is one’s superior.” “Anko-san” are integral to island life and customs on Oshima.

Team B especially wanted to pass on the island treasure of “money-making.” They impressed upon participants the pragmatic view that things can only be preserved for future generations if the island and its people are making money. They spoke powerfully of their desire to utilize the present-day attractions of Oshima and combine tradition with innovation to create a future for the island.

“People” were the focus for Team C. Thinking particularly about the future, people from outside the island will be crucial. In order to encourage them to come and play active roles on Oshima, it will be vital to help them learn from the island and the kindness of the islanders who can provide them with back-up. This presentation emphasized the importance of human resources for the island.

Team D focused on the island treasure of “things in jeopardy.” While some features like the Ura-Sabaku, Oshima’s famed black desert, will remain untouched for the future, others are falling into decline, such as the camellia-lined street known as Tsubaki Tunnel, which tourists no longer pass down since a new road was built. Stressing the need to value such features, the team emphasized the importance of continued publicity efforts to ensure they preserved for the future.

Having heard these presentations, the secretariat noted that the conversations had facilitated mutual understanding among participants, and reiterated its desire for attendees to harness this understanding for further discussion in future Island Meetings.