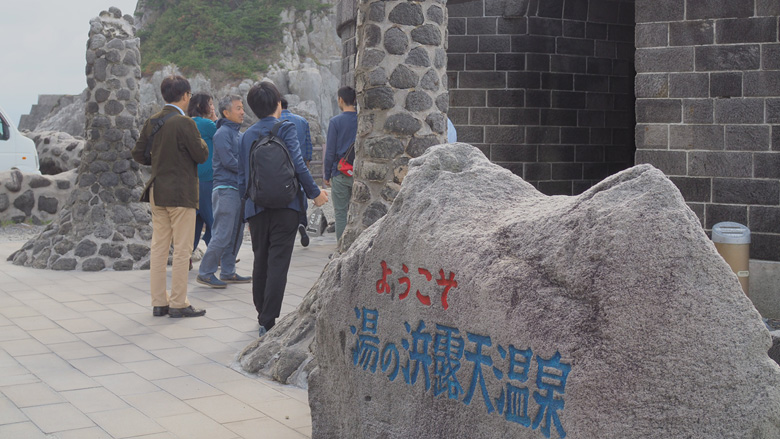 The Tokyo Treasure Islands Project is a project which aims to refine the Tokyo's islands brands through "Shima-Kaigi" (Island Meetings) with residents. This report covers the fourth Niijima island meeting held on October 17 and 18.

For the fourth island meeting, representatives from the experience reservation website TABICA and the mobility platform CREW, both of which were the destination of the study tour in July, were invited to Niijima.

The goal this time is to consider in details collaborating with the two companies listed in the action idea for branding Niijima. With representatives from the companies who came just for the meeting present, the event began. 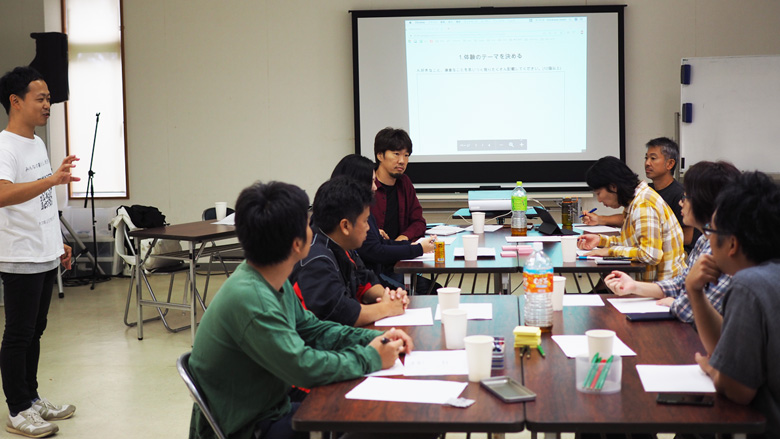 For the first day, Tetsuo Hosokawa, the director of the Business Division's Regional Development Office at GaiaX Co., Ltd. explained TABICA's structure, method of use, and examples of collaborating with different regions.

The participants were focused on the role of the regional coordinator, whose job is to provide support to the tourists and the host providing the experience. Some of the suggestions raised included using this concept to support the developers of the experiences as well as the tourists by acting as a bridge between them to make initiatives within the island flourish.

What plan offers the lifestyle of Niijima as it is?

A workshop to create an experience plan for Niijima was conducted in the afternoon. Mr. Hosokawa explained that TABICA's experience plans are "meant to provide an experience that reflects the residents' feelings and preferences as it is." Using "rare, interactive experience, and combination of several contents" as hints, the participants were split into teams to brainstorm plans. 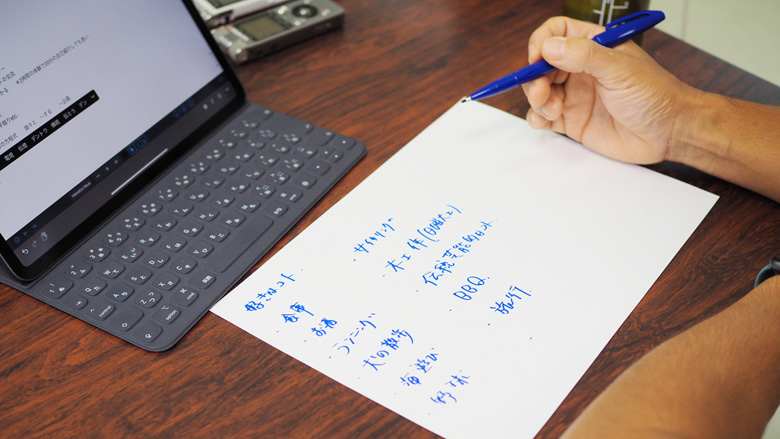 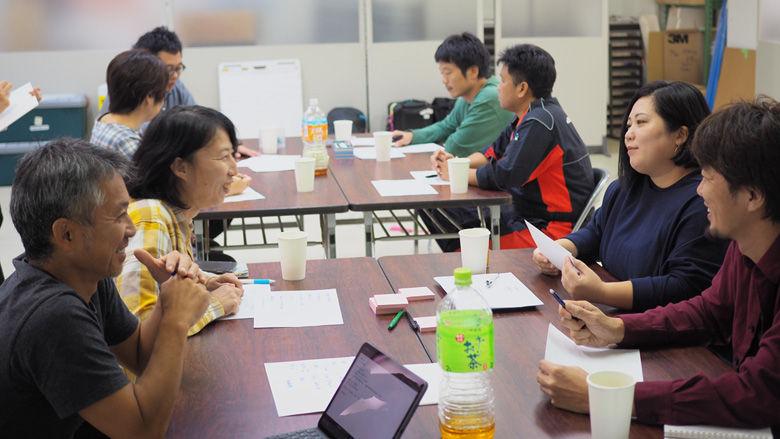 The participants came up with a variety of plans including a guide on the best surfing points for the day, a neon flying squid tour on a summer night, creating salt from seawater around an open fire, an outdoor barbecue with a self-builder who likes to listen and has been coming to the island for over two decades, and beachcombing and digging up agile crabs.

Other ideas include experiences involving a combination of the scenery at Niijima and the gaming world and exploring the alleys and enjoying tea with grandmas. It was a lively discussion with participants suggesting collaborating with others, and there were signs that the experience plans were deepening.

Detailed consideration of adopting CREW as a transportation method

The second day began with a lecture by Daisuke Okamoto of Azit Inc, which operates CREW. 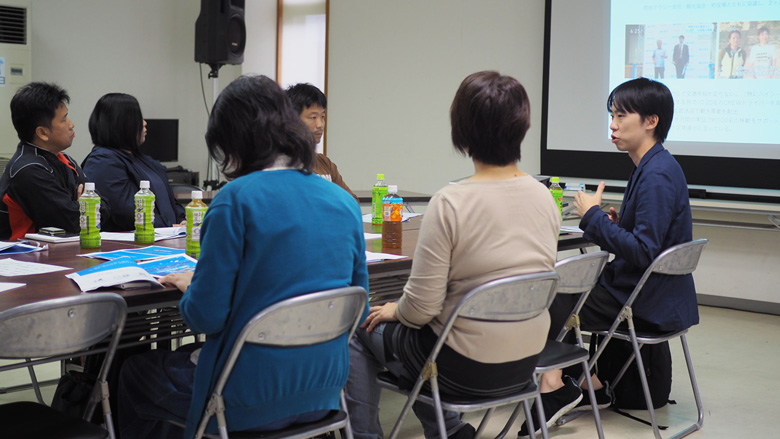 CREW is a service that users with no method of transportation use to meet a driver who will drive them to their destination using their car.

A video that introduces the service was played, and the participants were able to understand the service of using your own car to transport people and the worldview of people helping people that CREW provides.

In the Q&A session that followed afterwards, the questions focused on demonstration experiments done in Nagasaki Prefecture's Hisaka Island, Goto City, deepning the understanding of execution.

After the Q&A session, the participants went with Mr. Okamoto to observe the island.
The participants went around the island while imagining how to use CREW and TABICA. They reconfirmed the various resources that are the treasures of the island, and how transportation from the Wakago area, where ships dock, and the central area are lacking. The discussion on how to use CREW further deepend.

Creating a team first and proceeding to validation for branding

The study tour with the two companies ended with an exchange of opinions with eyes on execution.
Here, there was a proposal to make Niijima OIGIE, which is taking part in utilizing vacant houses and creating community spaces, a coordinator of the two companies. 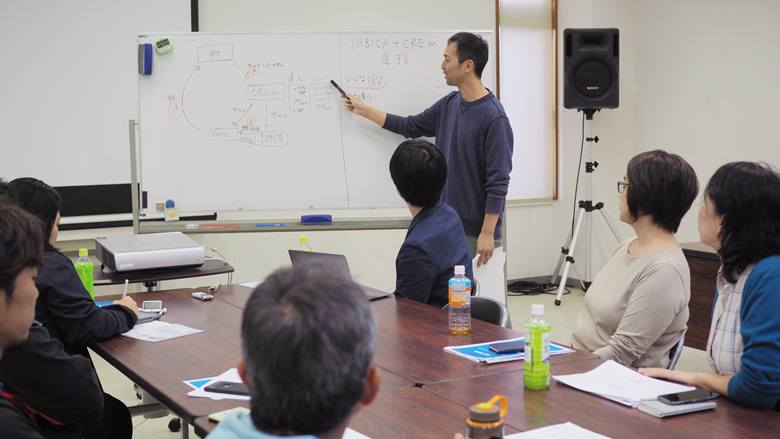 In addition, the participants said, "The goal isn't to make CREW and TABICA create a cooperative plan," and "It would be nice to have a team (to realize the branding)." The study tour on the second day ended by finding a direction to proceed, which involves creating one official model plan by creating a team, linking with TABICA and CREW, and creating and executing experimental plans centered on that plan for verification.

Participant Kumi Umeda said, "It wasn't a one-way talk and I was able to have a conversation that better suits the region. It was nice having the people from TABICA and CREW come and take a look." Yumi Miyakawa, who publishes Niijimag and is the representative of Office Oyo said, "There were realistic talks and it was interesting to hear various ideas being presented. I was able to envision whether things are possible or not, and I was able to have a clearer picture of things."

Using what was learned at the study tour as a base, the participants will look forward to the Tokyo Treasure Islands Meeting, which will be held on November 25, and the fifth island meeting.