The Tokyo Treasure Islands Project is a project which aims to refine the Tokyo's islands brands through "Shima-Kaigi" (Island Meetings) with residents. This report covers 2nd island meeting held on July 9 for Niijima.

People who desire to connect are those who understand the island 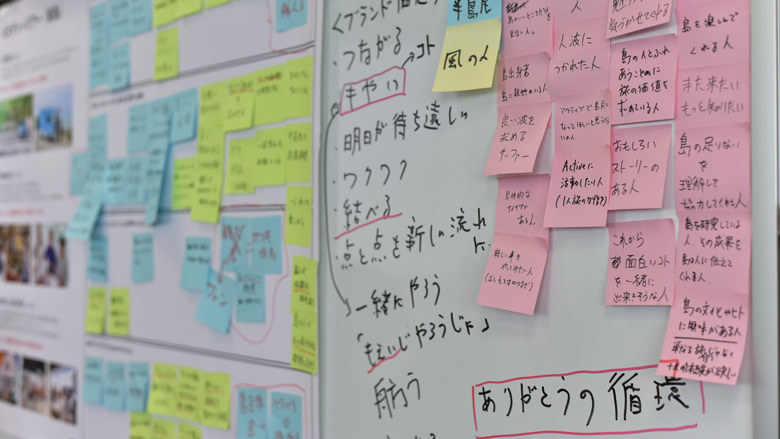 After the first island meeting that was held in June, the appeals of Niijima were categorized into four sections: people, experiences, things, and places. 2nd island meeting began with the moderator suggesting that the theme of Niijima could be "connecting."

When the discussion delved into what kind of people to connect with, the participants reached a common understanding that they wanted to connect with people who understood the island. Digging deeper showed a persona that fulfilled two broad conditions: overall nature (i.e. people that have basic manners) and specific personality (i.e. people who have an interesting story). 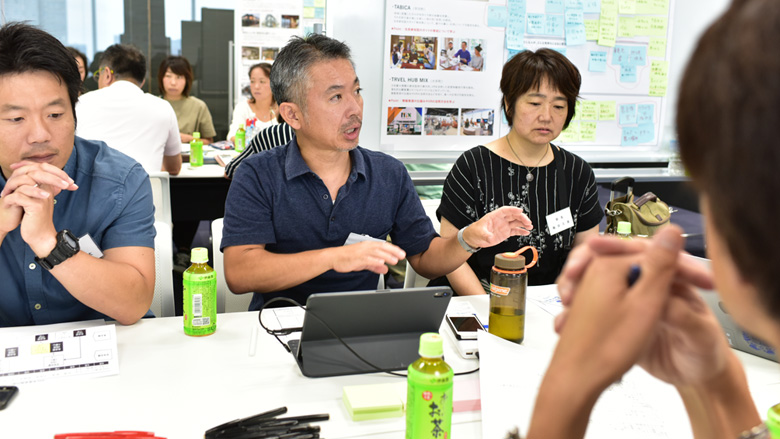 The discussion continued by asking to describe the person in one word. Keywords included playful, curious, sensitive, half-islander (people who are not residents of the island but have visited frequently and have assimilated as if they were a resident), people who are not locals but can make action inside the island, and wind people*.
*An expression used in regional revitalization activities. "Wind people" refers to foreigners. "Earth people" refers to locals.

In response to the moderator asking what would happen if these were combined, the participants said that if that happened, it may not be suitable for Niijima. Ultimately, it was agreed upon that the persona that Niijima wants to connect with is someone who understands the island as a basis, has a playful or curious personality, and is someone who is engaged in creative work and wants to create something together.

Together as one: The future of the island created by the spirit of moyai

Next, the value of the Niijima brand was discussed once again. Looking back on the study tour from the previous day, it was concluded that it would be best to effectively make use of sharing that is the island spirit, the entire island as a treasure, connecting, and the moyai.
*Moyai refers to the spirit of helping one another through joint efforts. In Niijima, it's often used to refer to cooperation in order to achieve something.

In response to this conclusion, the moderator pointed out that moyai, one of the keywords, is a good match for Niijima, and proceeded to ask what the word would mean if it was analyzed further. The participants responded by saying that the word is quite heavy and that they wanted to make it a lighter word, and that the spirit of moyai belongs to the islanders, so a new word should be combined with the spirit of people who don't live on the island. Others said that they wanted to create a cycle of gratitude. Still others said that they wanted a word that means "to make together." 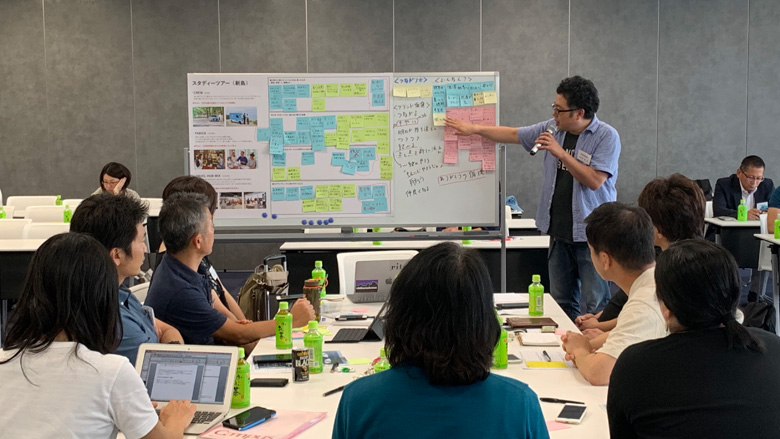 To finish off 2nd meeting, the contents of the discussion were shared with participants from Toshima and Shikinejima, who were using the same meeting room. In the next meeting, ideas for action will be discussed to see what kinds of value can be created from connection through people who have creative jobs that can find good things about the island, people who have the moyai spirit of collaboration, and things that create a cycle of gratitude, under the condition that the people have an understanding of the island.