The fourth Island Meeting on Miyakejima was held on December 13, 2018, on the second floor of the Kokoport Ferry Terminal in Ako.

A review of the third meeting was followed by a recap of Island Meeting objectives and an outline of the specific goal for this meeting, namely to define the value that participants want to provide to the typical visitors (personas) determined in the previous session and draw up an action plan. Participants then took turns to present their thoughts on “island treasures” they would like to communicate to the personas. 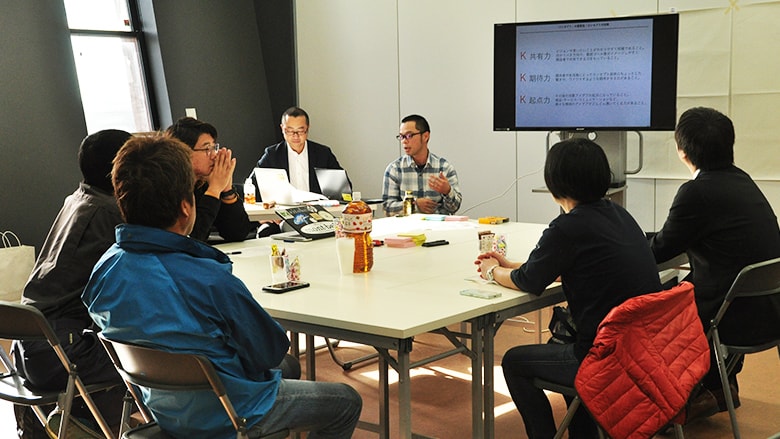 For the persona of the woman in her 20s or early 30s, examples of “island treasures” were illustrated by photos of scenes depicting a tour package to encourage repeat visits to the island, titled “living the journey” and photos of Miyakejima at dusk, titled “sun setting on Sanbon-dake” and “twilight at Sabigahama.” The images were evocative of having leisure for reflection and restoration and enjoying time to oneself. A range of approaches was presented, for example enabling visitors to experience everyday island life through farm experiences.

“Island treasures” that the group wanted to offer the family with parents in their late 30s were illustrated by photos of Shiitori Shrine—where people can learn about the terrible mudslides caused by the volcanic eruption in 2000 and about revegetation—and Hyotanyama, with its beautiful contrast between the green of the island and the blue of the sea and sky. Both are scenes unique to a volcanic island that the visitors envisaged by the personas would witness the untamed forces of the earth that they have not experienced before. Other photos depicted the wild ruggedness of Nippana Shinzan and the bouldering facility at Miyakejima Recreation Center, which is one of the largest public facilities of its kind in Japan and offers an activity for rainy days. Both of these are climbing activities that can be enjoyed by the whole family, offering an even richer array of experiences.

Having identified the “island treasures” they would like to communicate to their personas, participants summarized their views on an island brand concept sheet. Examples of Miyakejima brand values included “an elemental environment uncontrollable by humans,” “the ability to prompt reflection,” “unique encounters,” “a wealth of emotions,” and “tenacity honed over time.” Characteristics and realities underpinning those values included “shared values with islanders” in respect of people, “the volcano” and “raw nature” in terms of things, and shrines and festivals as experiences. 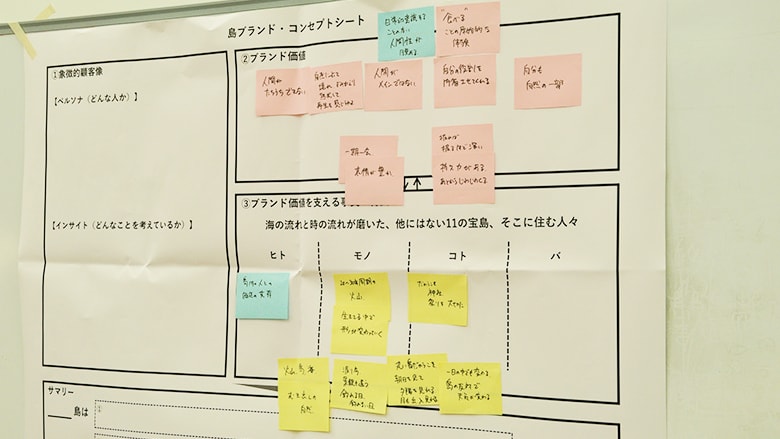 Based on these brand values, the group then considered what kind of experiences and forums could be created to communicate island values and listed ideas for action. In addition to outdoor experiences making the most of Miyakejima features, such as volcanic crater tours and a Sabigahama webcam, many participants suggested innovative tour plans, including working holidays and farm discovery tours enabling visitors to experience typical island work relating to nature over the medium to long term, night tours, and adventure tours enabling out-of-the-ordinary experiences such as turtle-watching from the cliffs and viewing wild seas and the volcanic crater.

Most participants agreed that distinctive Miyakejima values such as the volcano and local food were essential, and that seasonal tours would encourage repeat visits and give tourists a chance to witness the many and varied faces of the island. The meeting concluded with broader discussion of challenges and prospects that raised several questions. For example, since volcano tours and fish meals were already offered, how could these be spiced up? Having decided on brand values, isn’t it enough to simply emphasize them without making big changes to what is already being done?

In consultation with the facilitator, the group will now draw up an action plan. An interim presentation on the action plan resulting from Miyakejima Island Meeting discussion will be made at the 2nd Tokyo Treasure Islands Meeting on January 29, 2019.