The third of Miyakejima’s Island Meetings was held on November 29, 2018, on the second floor of the Kokoport Ferry Terminal in Ako. Following on from the first and second meetings in the series, it was attended by 10 participants from various industries including tourism and fishing.

After a recap of the second meeting, participants shared their current feelings about the process before moving on to the main purpose of the third Island Meeting, which was to imagine the persona of a typical island visitor and develop a firm image of that person. The group divided into two teams, and drew up a specific personality and profile for a typical visitor by looking at photographs of various people and imagining personal details about them such as gender, age, work, lifestyle, family composition, hobbies, and character, as well as considering how they spend their holidays, what they value, and what they might want from a trip to the island. Ultimately each team narrowed its selection down to just one or two photos representing a typical visitor to Miyakejima. They then further refined a concrete image of what these typical visitors might want from their visit before presenting their thoughts to the whole group. 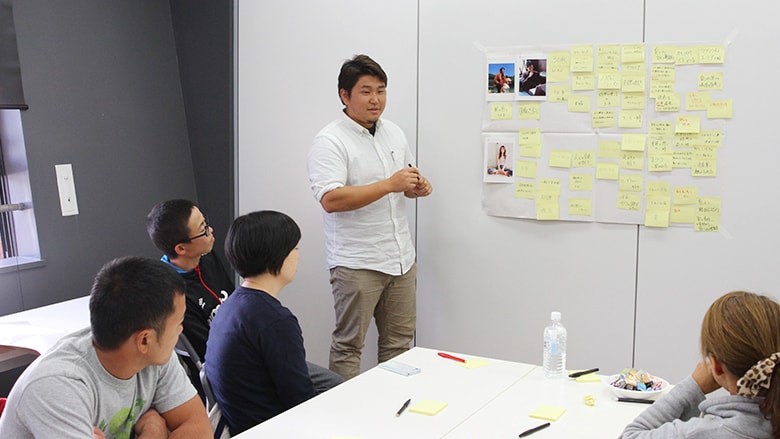 Team A selected a photo showing a three-generation family including parents with their child and grandparents. Team B chose one photo showing a single male in his thirties and another depicting a single female aged around 30. Each team also determined what each of their typical visitors might want from the island, and the whole group went on to identify points in common and differences between the personas chosen by the two teams, including key words describing them. The two teams combined for a lively discussion about drawing up a more concrete persona, which led to unanimous agreement that the first thing was for people to come to Miyakejima, get to know the island, and get to like it. From that perspective, the group concluded that the family chosen by Team A and the woman chosen by Team B would be the ideal personas.

Having decided on these two personas, participants brainstormed keys for success (KFS) required by the island. Each team specifically identified how they can attract their personas to the island and what is required to achieve that, and then presented their findings. For its family persona, Team A focused on encouraging them to come again and visit outside summer, enabling them to experience the wild natural environment of a volcanic island, and providing experiences and human interactions. To this end, the island would need to develop a menu of local experiences (enabling visitors to think about what to do once they arrived) and consider how to create value out of the idea that “there’s nothing here.” Team B thought that their female persona would seek a sense of belonging and a role on the island, experiences and personal interactions, and ways of finding enjoyment even on rainy days. With regard to the island’s issues and requirements, they considered that it would need coordinators and other tools to connect outsiders with islanders, ways of putting into words things that are a matter of course for islanders but would be novel for outsiders, such as seasonal wildflowers, and the ability to guide visitors to hidden spots known only to locals.

At the end of the discussion the facilitator noted that “experience” was a key word for both personas, and that rather than in-depth experiences, light-hearted experiences would enable visitors to come to the island without a definite purpose in mind. Would visitors be able to feel that they had a participatory role on the island? In that context, “sense of belonging and role” was a very interesting key phrase. Finally, to link these outcomes to the next meeting, participants were set the task of identifying island attractions they would like to introduce to the personas profiled during the session and taking actual photos of places and things that could become “island treasures.” This brought the third meeting to a close.