Island Meetings are cross-sector forums where people involved in businesses and industries that support island life and those seeking to invigorate their islands can gather to discuss island branding. The fourth Island Meeting on Kozushima was held on December 26, 2018 in the café at Vacation House Familia, a B&B-style accommodation facility. Eight participants from various industries spared time from their busy year-end schedules to attend the meeting. 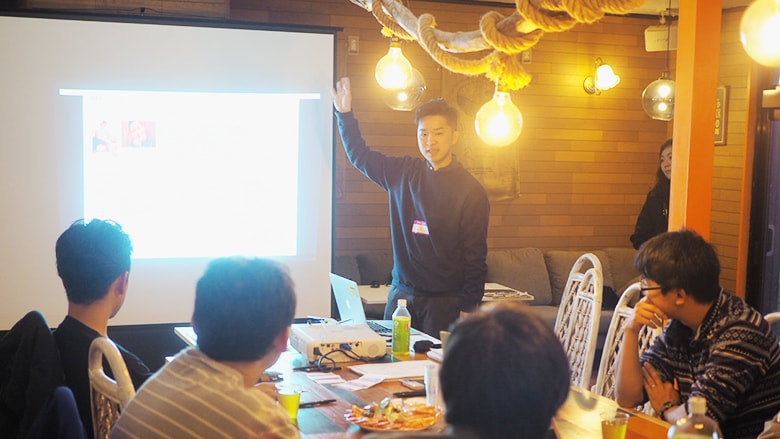 At the previous session, the group decided on the persona of a foreign couple in their 30s (Bob and Angie) as representative of Kozushima visitors. The main task set for the fourth meeting was to consider a specific action plan for this persona. The starting-point for this was “island treasures” the group wanted to communicate to this persona. To illustrate such “island treasures,” participants took turns to present photos of things, experiences, places, and other island attributes they had taken since the previous session, along with worksheets describing the images.

While listening to the presentations, the facilitator posed questions such as “what kind of feeling would this evoke in the persona?” and “what would be the value of this for the persona?” Key phrases from participants’ presentations were written on stickers and affixed to a wall to help the group visualize treasures and their value.

For example, Kobeyama, long known as a quarry site, does not appear in guide books, yet offers expansive views. Similarly, Kamitsuzumi and Konokuchi, spots known solely to fishing crews and accessible only by small boats, are truly off the beaten track.

Participants also noted that traditional fishing-village culture, which still thrives on Kozushima, has value for those who are likely to move to the island. Commonplace sights for islanders such as a dinner featuring all kinds of fish served in a fishing-village guest house, or multi-coloured agar drying in the sun, are all vivid scenes for tourists.

Another proposal suggested was adding an English guide to the starry-sky viewing sessions currently operated for tourists so that they could be enjoyed by foreign visitors, and providing star-gazers with hammocks in summer and sleeping-bags in winter.

To help people visualize the thoughts and ideas proposed, each participant was then given four stickers and asked to vote on the key phrases affixed to the wall that they regarded as especially important. As a result of this process, votes focused on the key phrases of “fishing-village culture” and “mystique,” treasures embodying Kozushima like “historical stories” and “experiences detached from modern society,” and feelings evoked in the persona visitors as they came into contact with treasures such as “thinking about the meaning of happiness.”

Next, each participant wrote three particularly important elements of brand value and three features or realities underpinning brand values on tags and stuck them on an island brand concept sheet. Examples of key brand value elements included “mystique and sublimity of places and scenes” and “gratitude for the bounty of the sea and mountains.” Features or realities underpinning brand values included “guest-house hosts” in terms of people, “jellied agar” in terms of things, “Tokyo fishing village culture and the bounty of the sea” as experiences, and “Takowan Bay” and “Konokuchi” as places.

Based on the brand values described above, participants then wrote their ideas about what kinds of experiences and places would communicate these island values to the persona on an action idea sheet and presented their thoughts to the group. Plans suggested included boat trips to spots seldom visited even by islanders, unusual and out-of-the-ordinary adventure tours, tours enabling visitors to experience splendid alfonsino fishing together with the distribution process of wholesaling and packing the fish, and tours offering the experience of Shinto rituals associated with skipjack tuna fishing.

The facilitator commented that the ideas had two broad themes in common: tours to spectacular places around Kozushima and tours focusing on the fishing industry, before concluding the day’s program with the suggestion that combining compatible experiences in each category could further enhance tour content.