Island Meetings are cross-sector forums where people involved in businesses and industries that support island life and those seeking to invigorate their islands can gather to discuss island branding. The third Island Meeting on Kozushima was held on December 3, 2018 in the café at Vacation House Familia. Following on from the first and second meetings in the series, nine participants from various industries came together again on the island. 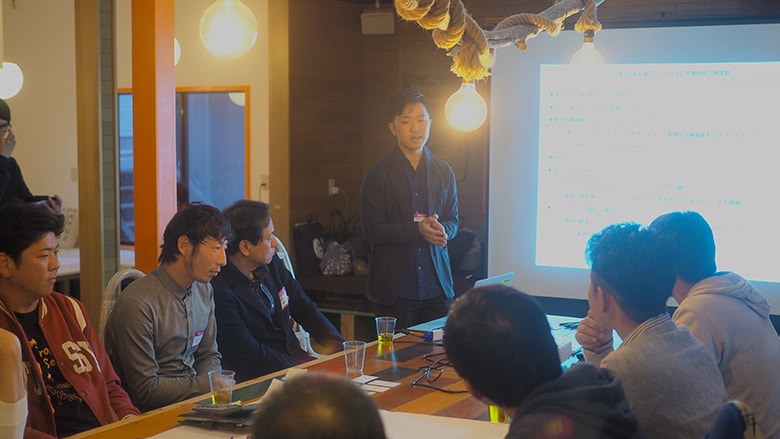 After welcoming remarks and a recap of the second meeting, participants moved on to the main purpose of the third meeting, which was to imagine the persona of a typical island visitor and develop a firm image of that person. The facilitator explained that rather than trying to aim branding at everyone, it is easier to communicate “island treasures” in attractive ways when you have a clear persona for the type of person you want to evoke empathy in and turn into a fan of the island.

The group divided into two teams and used 150 photos of people to imagine personal details about them such as gender, age, work, and lifestyle. Participants each considered what kind of people they wanted to come to Kozushima, and narrowed their selection down to one or two photos before sharing their choices with the other members of their team. After further discussion, each team selected one or two of the images, developed a persona for the typical visitor represented by those images, and wrote down details on stickers.

Team A selected a photograph of an independent-looking woman in her 30s. They decided that she had been born and raised in a Tokyo suburb that still had plenty of greenery, was 37 years old and single, worked in middle management in the apparel industry, and liked to visit tranquil places on weekends.

Team B chose two photos: one of a foreign couple and one of a Japanese couple in their 60s or 70s. They decided that the foreigners were Australians who liked to take longer trips of a week or a month. Since the seasons in Japan are opposite to those at home, these visitors would like to enjoy a leisurely stay on Kozushima in the off-season, and would like to get to know the real Japan by staying in a rural area rather than a resort. The team decided that the retired couple live in a detached house with a garden in Tokyo’s Setagaya Ward, and like to travel. Having tired of resorts, they prefer Furano in Hokkaido to Okinawa.

Considering the single woman, the retired couple, and the foreign tourists, the group was asked for a show of hands on which of these three personas was the best fit for Kozushima. Six of the nine participants voted for the woman and three for the Australians. However, when the three who chose the foreign visitors pointed out that single women already come to the island and foreign visitors would come in the off-season, other participants began to come around to the new idea of attracting foreigners. As a result, the vote changed to six for the foreigners and three for the woman, and the foreign tourists were selected as the persona for the Kozushima visitor. 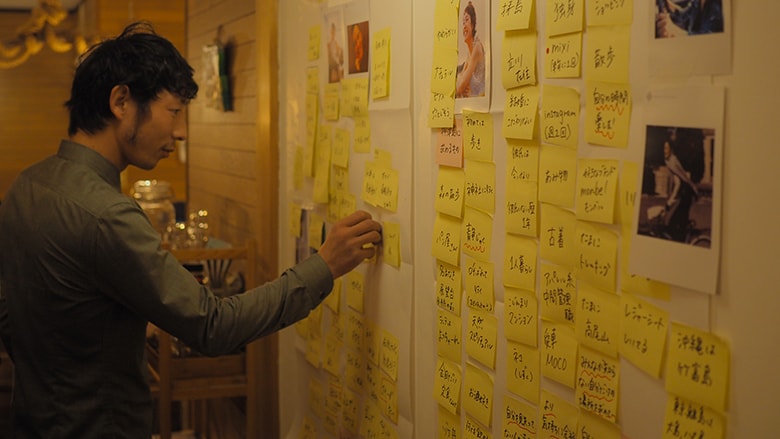 After deciding the persona, the group moved on to the task of listing keys for success (KFS). Each team specifically identified how they can attract the persona to the island and what is required to achieve that, and then presented their findings.

Team A suggested showing a completely different face of Tokyo, and presenting the island as an ancient yet novel place where visitors can discover a new Tokyo. This would require an appealing story targeted at the foreign tourist market, more English signage, and publicity targeted at a foreign audience.

Team B felt it was important to consider whether there are experiences that will make people want to come again. They suggested several spots not listed in guidebooks and known only to locals as places unique to Kozushima where visitors could have completely new outdoor experiences.

At the same time, the group noted that an increase in foreign tourists would place a greater burden on accommodation providers and questioned whether the island could meet the needs of long-stay visitors. These challenges would need to be addressed in the future.

Based on the outcomes of the discussion, participants were set a task to complete before the next meeting. They were each asked to identify island attractions they would like to introduce to the persona profiled during the session and take actual photos of places and things that could become “island treasures.”