The 4th Island Meeting was held on Hachijojima on December 21, 2018 in the training room at the Hachijomachi Chamber of Commerce and Industry. Seven participants who had attended all the meetings in the series gathered for the session. After a recap of the previous Island Meeting, the facilitator outlined and reaffirmed the aim of the Island Meetings as well as the goals for the 4th session, namely defining the values that the group wanted to provide to the typical visitor (persona) and drawing up an action plan, before asking participants to present their individual thoughts on “island treasures” they would like to communicate to the persona.

The persona chosen for Hachijojima was a woman called Yuki, an influencer who is good at sharing information with those around her. Each participant described the treasures they would like to show Yuki and imagined how she would feel about experiencing them. Examples of her feelings included, “I made new friends and would like to visit Hachijojima again” and “Next time I’ll have to take my camping gear!” Participants also summarized the value that specific treasures could bring to the life of the persona and how they would relate to the essential attractions of the island. To visualize the ideas put forward in the presentations, they then each voted on the three best treasures and the three values they most wanted the persona to perceive. As a result of this process, the highest votes for “island treasures” went to “hub for people to meet,” “hachijo lemons, umikaze (sea breeze) shiitake mushrooms, and other produce grown in the unique climate of the island,” “sea and mountain tours to restore and stimulate,” and “indie vibe.” Values that participants especially wanted the persona to perceive were “warmth of the people,” “the island terroir,”(*1), “boost of vitamin H,”(*2), “cycle of recharging and detoxing,” “eating taste of Hachijo’s distinct cuisine,” and “heightened spiritual receptivity.”

*1 Flavors and fragrances that reflect the local environment.
*2 A term coined from the “H” of Hachijojima to express the power of the island to re-energize people through humor, healing, etc.

The next task was to arrange the island values perceived by the persona on a chart. The key phrases were “island climate” and “cycle.” The facilitator summarized the persona characteristics and brand values noted on the chart by assessing the Hachijojima persona as a woman who is highly sensitive, prefers natural environments, and wants to improve herself. She likes nature and wishes she could have a hometown in the countryside. She likes people but city life tires her. The facilitator assessed this as a realistic persona.

What this kind of persona needs is physical and mental refreshment and self-improvement. The key phrases for the island’s brand concept are “things reflecting the climate and true essence of Hachijojima,” and “cycle.” A Hachijojima brand concept sheet was drawn up based on the facilitator’s summary. 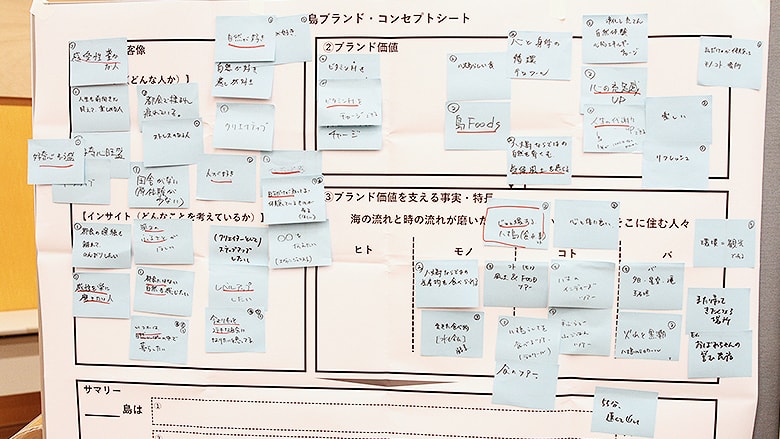 In light of the brand values listed, the group then examined what kind of experiences and opportunities would need to be created to communicate Hachijojima values. Each participant wrote ideas for plans on an action idea sheet and presented his or her thoughts. Proposals included mountain food tours using island ingredients, where visitors could go into the forest and savor the joys of cooking for themselves, a visitor information service as the gate to the island to help people decide what to do, and culture/food tours where visitors could experience the island culture and climate with all five senses through food.

The program for the day concluded with a suggestion from the facilitator and the secretariat that rather than restricting the scope of their plans to tours, the group may wish to first consider ways of providing information as a starting point for Yuki to freely select island attractions. The next task will be to draw up an action plan in consultation with the facilitator. An interim presentation on the action plan resulting from Hachijojima Island Meeting discussion will be made at the 2nd Tokyo Treasure Islands Meeting on January 29, 2019.