After reviewing the 2nd Island Assembly, the attendees imagined the “symbolic customer icon (persona),” the theme for the 3rd Assembly, then, began narrowing down the customer image. The attendees were divided into two teams and selected the right personas from 150 cards with photos of people. Teams A and B finalized on two cards each, summed up their brainstorm on paper, and presented the image of the selected persons. 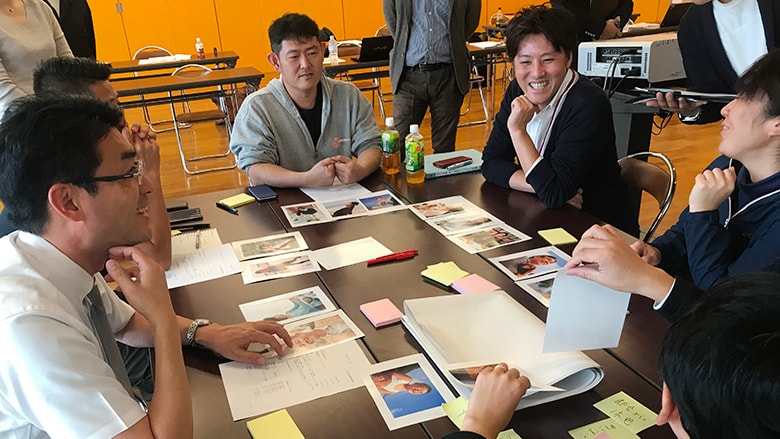 Team A described two distinct personas for the busy season in spring and summer and quiet season in fall and winter. The persona in the busy season was a young woman with children. Comfortable economically and psychologically, she was able to take accidents such as canceled ship or a long travel on boat as a special experience and positively enjoyed a family trip. The persona for the quiet season was a male business owner around 55 years old. He was drawn to a hideaway island close enough to the city. He had an intellectual curiosity to enjoy field work in history and culture and loved a long stay with good food and relaxing hot spring.

Meanwhile, Team B imagined nature-loving personas that prefered a long stay during a quiet season and a vacation with a pet. One of their final two choices was “Yuki-chan,” an artistic creator in her 30s. She came to Hachijojima to recharge spiritually and physically. While often visiting the island during quiet seasons, she had made drinking friends. From contacting nature and locals, she received inspirations and energy to take home for her creative work. The other persona was Sakamoto in his 30s with a pet. He was a dog lover but insisted no clothing on the pet and also single-lens reflection camera. He was a middle-position leader at work with his own tastes on things. It became clear that both personas liked a long stay and they were the generation who hadn’t visited the island yet.

Afterwards, there was a workshop to spell out points that were likely to be endorsed and accepted by these personas - KFS (Key For Success). Here, two perspectives were essential: “the needs of the personas” and “the elements on the island that matched the personas’ needs.” Accommodations for a long stay such as rental vacation homes, introducing 5G sooner than anywhere else which provided the internet environment for remote work, and many other elements were mentioned. Then, Team A proposed new key words “hands-on experience of the rare.” Team B came up with “Yosare*” and “Home away from Home.” They discovered that meeting local people would lead to a long stay. (*Hachijojima’s dialect meaning “welcome”)

Lastly, the office staff tried to organize personas from both teams into one. However, promotions during busy and quiet seasons call for different targets; it was a challenge to roll them into one. In the end, the appealing persona from Team B, Yuki-chan, was selected as a core character with other personas linked to her as Hachijojima’s symbolic customer icon. It was decided for each member to think of “the Island’s treasure” to recommend before the next Assembly and to bring its photo with the persona in it to the next meeting. 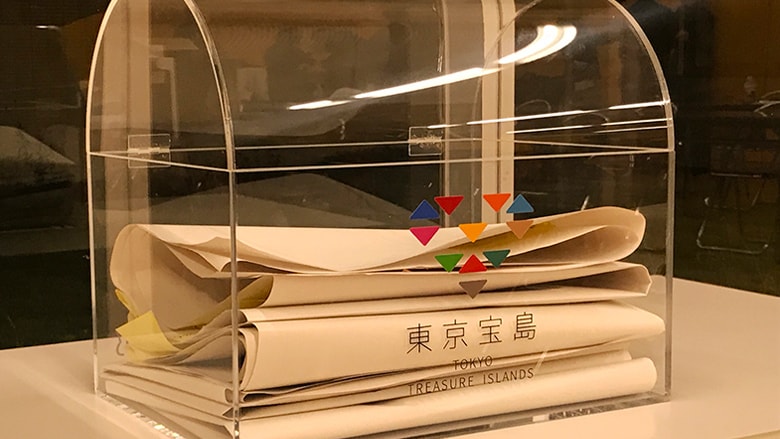 At the corner of the hall, a treasure box with the “Tokyo Treasure Island” logo was sitting. After the Assembly, the paper used for the presentation by each team was placed into the box. This box is set on the four islands that have been implementing the Island Assembly this year. After each Assembly, more contents will be added to each treasure box.