The Tokyo Treasure Islands Project was launched in 2018 with the aim of further expanding the appeal of Tokyo’s islands by making even more effective use of their wonderful scenery, local specialties, culture, and other attributes. The residents of the 11 islands in the Pacific that form part of the Tokyo Metropolis have taken the lead in this initiative to create, refine, and broadly publicize the Tokyo Treasure Islands brand and generate added value for the islands. In fiscal 2018, the four islands of Oshima, Kozushima, Miyakejima, and Hachijojima are each holding a series of Island Meetings to discuss branding. This article reports on the 1st Island Meeting held on Hachijojima, an important milestone for the project.

On September 11, 2018, ten island businesspeople from disparate sectors including dairy farming, general agriculture, kusaya dried fish production, accommodation, and eco-tourism gathered at a community center in Hachijo Town. Following a welcome from the Tokyo Metropolitan Government (TMG) Bureau of General Affairs, an outline of the Treasure Islands Project was given. Operating on the idea that island branding means packaging the attractive characteristics of an island, participants were given an example from Okinoerabu-jima island (part of the Amami islands in Kagoshima Prefecture), which showed how islanders are creating futures for themselves that will embody their ideals.

Participants then divided into groups of three to share views and discuss and present a collaboration plan utilizing the attributes of their respective business sectors. The plans presented reflected the individual strengths of team members, and included Hachijo taiko drum performances accompanied by dinner, publicizing the attractions of the island via a media mix of community radio and websites, and tours combining yoga with a farm experience.

Next, the participants split into two groups to put forward and discuss their views. Each group member wrote out “island treasures” (attractive or positive attributes, things, or people) that he or she wants to pass on to the future, and the groups then discussed them to come up with a single-page summary.

Team A’s list of “island treasures” they particularly want to preserve included Mt. Hachijo-Fuji, sea turtles, humpback whales, Ashitaba plant, shimazushi (“island sushi”), shiitake mushrooms, the indigenous stag beetle, the night sky, horticulture, the goodness and genuineness of the people, hospitality when transportation services are cancelled, preservation of the natural environment and systems for welcoming tourism to this end, tamaishigaki stone walls, traditional kihachijo silk fabrics, and other timeless positive attributes of the region. Team B listed the water that nourishes the local kusaya dried fish, history, Hachijo High School which educates the next generation, traditional kihachijo silk fabrics, the volcano, and wartime air raid shelters. The team highlighted “water” as a keyword linking the island’s natural environment and industries in their entirety.

In Island Meetings, residents of each of the islands will identify “island treasures” themselves, discuss them, and share opinions. In addition to this series of discussions, they will learn through field work in the metropolis and draw on the cooperation of outside experts as they consider how to shape the future of their islands. The ultimate goal of these meetings is to develop a brand for the island and generate added value. As well as identifying many local treasures, a key outcome of the 1st Island Meeting on Hachijojima was the idea that its brand should reconcile the two perspectives of utilizing the treasures as tourist resources and protecting those resources. 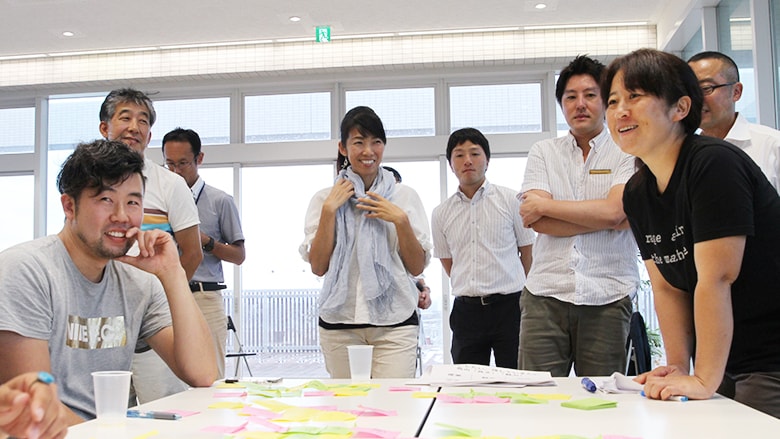