A view of Futami Harbor

The Tokyo Treasure Islands Project is a project which aims to add value to the Tokyo'sislands and polish their brands through "Shima-Kaigi" (Island Meetings) with residents. This report covers the first island meeting held on June 10 in Chichijima.

Chichijima with Hahajima, which are 50km apart, go online to start a simultaneous meeting.

A simultaneous meeting between Chichijima and Hahajima was held online for the inaugural island meetings of both islands. The only way to access Chichijima is by ship, which takes 24 hours one way from Tokyo. Hahajima is another 2 hours out by ship from Chichijima.

The islanders are busy every day. At the beginning of the meeting, the facilitator shared the positioning of this meeting as an opportunity to spread ideas and to provide a venue for the busy islanders to gather and talk.

First, in order to break the ice, each of the participants were given one minute to show off something small so that the discussions would begin in a relaxed atmosphere. 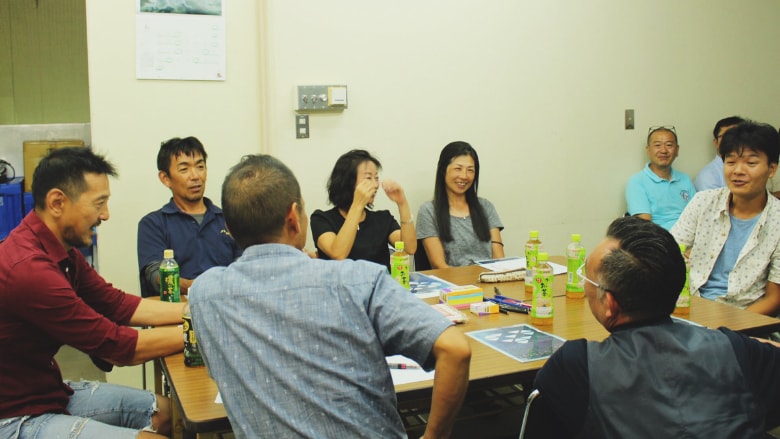 What are Chichijima's treasures? 13 people filled the paper with their ideas

The first theme is Chichijima's treasures.
The participants wrote their ideas on sticky notes and filled the paper with them. The items were then classified using how well they are known and how limited they are to the island.

Some of the points that came up included ideas on nature and culture of the island : Spreading the world's most beautiful Bonin blue* around the world, spreading the awareness of the island's fish, hot peppers, lemons, tomatoes and other foods, the World War II remains, the Ogasawara language consisting of a mixture of Japanese, English, and Hawaiian, and the hula dance that is performed with a song from Ogasawara. Others agreed by saying that the inconvenience of cellphones not receiving service outside of villages, which cannot be experienced in the mainland, is also one of the attractive points of the island. The presentation using the completed paper led to applause.
*The deep blue sea unique to the Ogasawara Islands. 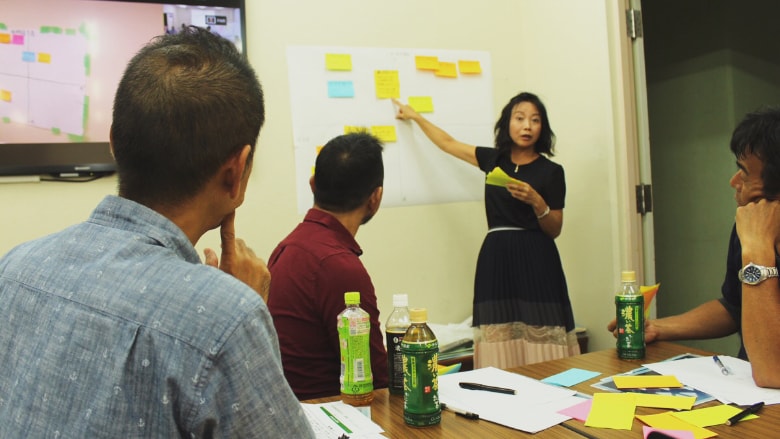 The second theme was a two-pronged approach of which points get engagements from fans, and which generation/gender is most likely to be a fan of those points.

The plants of Ogasawara would appeal to those over 60 who have retired. The green flash* which is said to bring happiness would appeal to couples in their 20's. Furthermore, the happiness stemming from the simplicity of the island would appeal to women in their 30's who are stressed from work.
*A phenomenon where the sky turns green for a moment when the sun rises or sets. It can only be observed when conditions such as temperature and humidity are perfect.

Lastly, three important "treasures" of the island were selected from the contents that were discussed up to that point. The three chosen were: The proximity of the ocean and the mountains, a society that has many points of contact with residents, and island sushi using the Japanese Spanish mackerel for an exquisite dish. Listening to the sales points of Hahajima through the internet allowed both sides to reconfirm the differences. (Note: Refer to the Hahajima report for information on the presentations of the Hahajima team.)

Homare Nishimoto, who participated in the meeting, said, "Writing the ideas on the sticky notes and visualizing them became a good reference for members who have different occupations." Hiroe Minegishi said, "This kind of experience is a first for me, but it was very fun thinking about new things as the discussion progressed."

The first island meeting resulted in a foundation for future discussions with many ideas. The meetings will be continued as well as the laughter and exchanging of opinions.