The Tokyo Treasure Islands Project is a project which aims to refine the Tokyo's islands brands through "Shima-Kaigi" (Island Meetings) with residents. This report covers the 2nd island meeting held on August 1 for Aogashima.

Four people participated in the 2nd island meeting, which began with a reflection of the first island meeting. The facilitator (meeting moderator) also explained the points of the meetings to those who didn't participate in the first session. The observation results from July's study tour in downtown Tokyo were shared among the meeting participants.

Afterwards, the facilitator, who called the difficulty of visiting the island due to its geographical positioning a "closed environment," introduced four examples of how deliberately placing restrictions can produce value. The participants listened attentively at detailed branding success stories such as the tour that goes around Niihau island in Hawaii, a private island tour that prohibits the entrance of the general population without actually landing on it.

Undiscovered? Other-worldly? Thinking of the uniqueness of Aogashima that produces rarity. 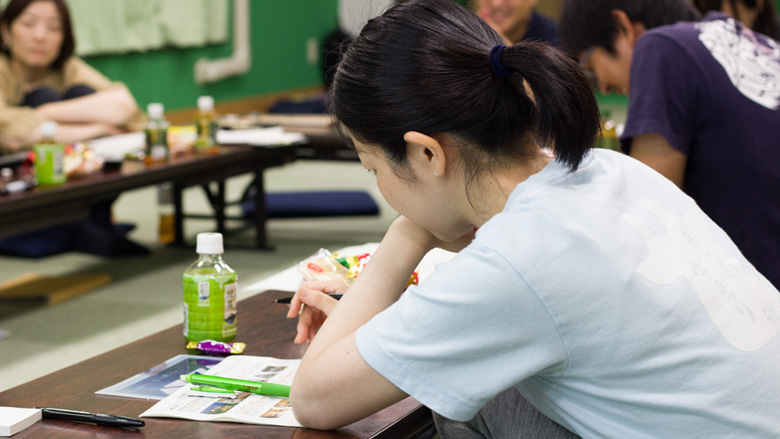 Next, two workshops were held.
The first theme: What are Aogashima's unique points that produce rarity?
While the participants struggled and said, "It's hard to think of what leads to rarity when you're living on an island," but came up with things that relate to its geographical location, such as the inconvenient transportation, the fact that the island is an undeveloped, isolated, and in a closed-environment, as well as things that relate to people, such as the close relationships that are formed as a result of the intimacy of nature and the lifestyle of the tough people on the small, remote, and isolated islands owing to the geographical and natural conditions. 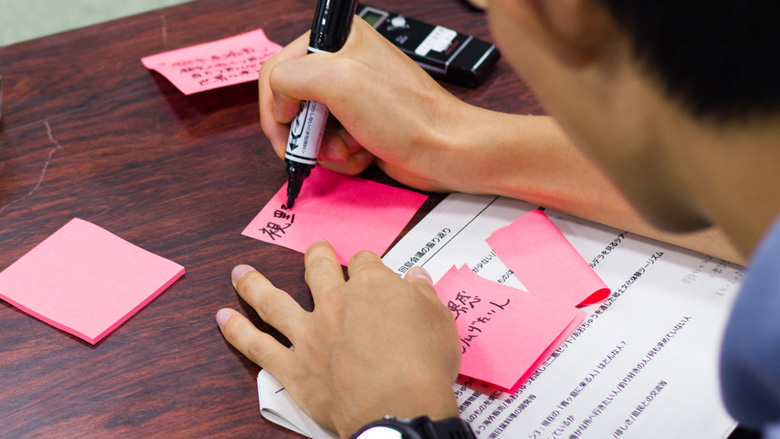 The 2nd theme: Who do you want to visit the island and get involved it?
Ideas included the young generation such as young people and children, who will take charge of the future of Aogashima and people who can take care of the nature and people of the island, including those enjoy interacting with the islanders, those that can respect the people, island, and history, as well as musicians, researchers, chefs, and artisans, who have skills that the island lacks. The various ideas raised during this workshop will connect to the important points of the following meetings.

To make more people participate in the island meetings, which are important opportunities.

Participant Kouta Arai said, "The island meetings are great opportunities for the islanders. I would like more people to participate in the future." Yuji Sasaki reflected and said, "The people are usually busy, so nobody has time to talk. The island meetings are important opportunities to gather and exchange ideas. I'm glad to have learned something I didn't know during the study tour last session as well."

Three more island meetings are scheduled to be held for Aogashima during FY2019. Participants will think about detailed efforts at the following meetings using the ideas that were presented during this session's workshop.