Island Meetings are cross-sector forums where people involved in businesses and industries that support island life and those seeking to invigorate their islands gather to discuss island branding. Participants from the four islands taking part in the fiscal 2018 program—Oshima, Kozushima, Miyakejima, and Hachijojima—came together on October 24, 2018 in Akasaka, Tokyo for the jointly-held second Island Meeting, which comprised fieldwork in the metropolis and lectures on regional branding by guest instructors. This article describes the first part of the meeting. 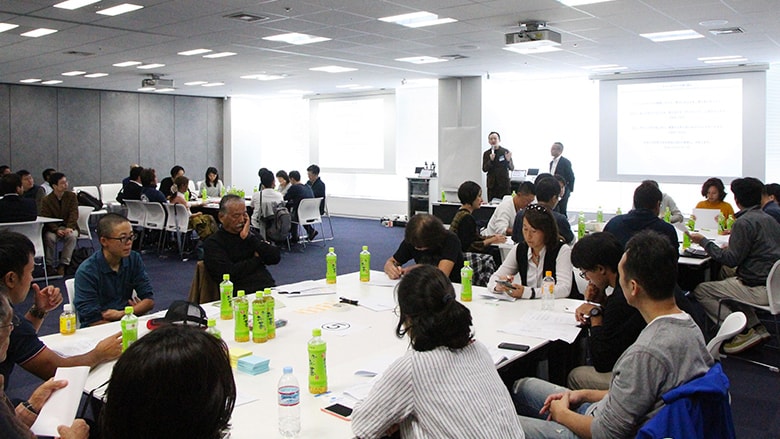 To begin with, participants divided into four cross-island groups and visited a range of local facilities engaged in branding efforts. The goals of this exercise were to obtain information useful for island branding and to gain tips and insights to take home and apply them to the task of branding and adding value to their own islands in the third and subsequent meetings.

Once this fieldwork was completed, participants reassembled in Akasaka and each group discussed what it had seen during the visits, wrote its findings on stickers and affixed them to large sheets of paper, and shared tips.

Examples of common key factors cited at the two facilities visited on the Shibuya route included rigorous concept development, the importance of people involved in running facilities and people gathering there, and the need to generate excitement. It was suggested that these key factors had similarities with the kindness and hospitality of islanders, the charms of the islands, and the excitement of out-of-the-ordinary experiences in the islands. The opinion was expressed that the islands could collaborate with the TRUNK (HOTEL), which has a strong focus on the local Tokyo market and the domestic market. Meanwhile, it was noted that islanders would need to change their mind-sets in order to turn their islands into destinations as appealing as the two facilities visited.

Participants on the Setagaya Line route picked up on many key points providing tips for the future from the three facilities they visited, such as utilizing positive attributes of materials to create facilities, aiming for the achievable rather than being driven by a sense of mission, taking an overview of the entire project and region and focusing attention and affection on things that already exist around you. All of the facilities visited shared the view expressed at Island Meetings that instead of creating new things they should re-think existing things and resources, and they seemed to get suggestions about where their focus should be placed for future initiatives.

Points of appeal highlighted on the Yanesen route included spaces and facilities having stories to tell, compact and easy destinations, spaces where interest can be found simply by being there, and a sense of affection for the area. Hints for future efforts included making positive use of a remote location, showcasing your area as one that people actively choose to visit, and striking the perfect balance between business and love for your locality. In doing so, it was suggested that in the islands they also would need to ensure high quality in every detail, and place importance on doing this as a matter of course even in everyday details such as the taste of local bread.

Regarding the three facilities visited on the Kiyosumi/Ryogoku route, the participants commented on the importance of themes and stories, consistency of concepts and targets, and placing value on the locality and community. A key tip given in common by all of the facilities was that they provided forums for new encounters. The participants also remarked that they were distinctive, showcased local color, used and renovated existing resources, and based efforts on wonderful ideas about each locality. They particularly noted that there is a limit to what anyone can achieve alone, and thus like-minded people need to join together. Through future efforts, they hope to expand such groups of like-minded people.